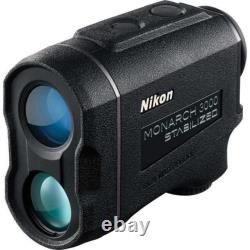 Nikon MONARCH 3000 STABILIZED Laser Rangefinder, 6x21mm. Whether you're a hunter scouting prey in the distance, a golfer calculating yardage to the hole, or just need an accurate read on a distant object, the Nikon MONARCH 3000 STABILIZED Laser Rangefinder, 6x21mm will not disappoint. These rangefinders have an effective range of nearly 2 miles (3,000 yards) , which is plenty of ground to cover for hunting or golfing and triple the ranging capability of last year's model. The most intriguing feature of the MONARCH 3000 STABILIZED Yardage Locator is that it instantly stabilizes the image you see in the 6x monocular while simultaneously activating the HYPER READ function for incredibly fast and accurate measurements.

This is especially useful when tracking moving animals on a hunt. While a one-handed device, this rangefinder can reduce the effects of vibration by a fifth or less , whether the vibration is caused by wind or hand movements. Golf courses and the wilderness have plenty of peaks and valleys which is why the ID (incline/decline) technology is essential - providing the horizontal distance to the target even when ranging at various incline or decline shooting angles. This is the perfect device for either golf or hunting because of the Tru-Target technology that delivers two different ranging modes: first target priority mode and distant target priority mode. It's also waterproof and fogproof making this the ultimate rangefinder for the outdoors. Get your Nikon MONARCH 3000 Advanced Rangefinder today for the most accurate and crisp readings on the market. Features of Nikon MONARCH 3000 STABILIZED Laser Rangefinder, 6x21mm. Effective range of nearly 2 miles (3,000 yards) on reflective targets. Variable intensity red OLED display with automatic or five selectable brightness levels for maximum contrast against most targets and backgrounds in virtually all lighting conditions.

Instantly stabilizes the image you see in the 6x monocular and simultaneously activates the HYPER READ function. Vibrations of the image in the viewfinder caused by wind, adrenaline, cold and other hand movements are reduced.

Nikon's advanced ID Technology provides the horizontal distance to the target, even when ranging at various incline or decline shooting angles - up to an incredible +/- 89 degrees. Choose between two different ranging modes depending on the situation. First target priority mode allows you to range an object as small as a fence post while distant target priority mode displays the range of the farthest target among a group of targets measured. The item "NIKON Monarch 3000 Stabilized Laser Rangefinding Monocular 16556" is in sale since Wednesday, September 22, 2021. This item is in the category "Sporting Goods\Hunting\Scopes, Optics & Lasers\Range Finders".